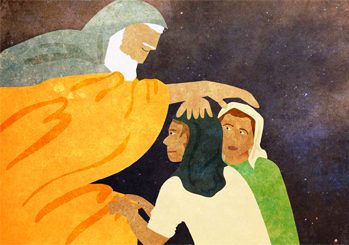 In the last parsha of Sefer Breishit, the actions and focus of Yisrael Avinu on his deathbed give us an insight on how our namesake viewed his time living in Galut. We saw in the previous parasha that the Achim became permanently settled in Mitzrayim. (See the Kli Yakar on Breishit 47:27-28 quoted by R’ Moshe Lichtman in כי מתורה תצא ציון). Following that theme of קביעות בחו”ל (becoming settled in Chutz La’Aretz)  our parsha opens up with a request from Yaakov to Yosef: אַל־נָא תִקְבְּרֵנִי בְּמִצְרָיִם, do not bury me in Mitzrayim.

Clearly Ya’akov Avinu understood what it meant to maintain a national identity in exile. During his entire 17 years in galut Ya’akov never lost sight of returning to the land of his fathers, the ארץ מגורי אביו. Ya’akov was physically in the Ma’arav but his heart was in Eretz Yisrael! He understood that Mitzrayim is not where he belonged and that he was not a Mitzri!

Similarly the midrash, in Devarim Rabbah 2:8, tells us that Yosef Ha’Tzaddik as well was zocheh to be buried in Eretz Yisrael because he maintained his national identity during his time in Mitzrayim, just like his father Yaakov did. We learn from both Yaakov and Yosef that we must never let our national identity be synonymous with the foreign country that we may find ourselves in.  We should proudly exclaim “Ivri Anochi!” as the Jewish people constitute a unique, distinct nation even when we are dispersed throughout the depths of Chutz La’Aretz. Being Jewish is not only a religious identity, it is also a national identity.

Starting January 21st every Jew, regardless of where they reside, has the opportunity to engage in the strengthening of the religious identity of our nation by voting for the OIC slate in the World Zionist Congress elections. Many of us see the importance in voting for the elections of a foreign government, how much more so should we value the elections of our own nation! We must never forget that we are members of a nation, of a collective, and we must vote for the future of our collective. Ya’akov Avinu was able to maintain his national association and identity while living in Chutz La’aretz, are we able to say the same?