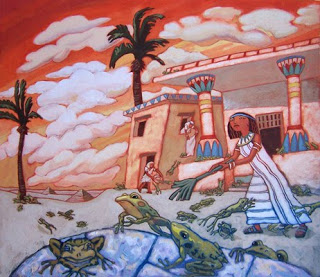 This week’s Parsha tells us the story of Moshe and Aharon going to Pharaoh in order to begin the task of freeing Bnei Yisrael from Mitzrayim. Before beginning to tell us their story, the Torah starts telling us about the Shvatim and their children. It goes through Reuven and Shimon, and then when it gets to Levi it starts going into depth. Why list the preceding Shvatim at all, and if so, why not list them all? The Malbim has a beautiful idea on this. He writes that before such a great mission, where Moshe and Aharon are the shlichim from God to Bnei Yisrael and to Pharaoh, we have to remember where they came from and the Kedusha of those who came before them. Also, we go through the people who are less important (in this particular part of the story) until we get to those who are the main characters. As a Mashal he writes about someone who loses a precious stone in the sand. He keeps searching through the sand until he finds the gem, going through less significant stones along the way. HaShem went through Reuven but didn’t find the gem. He moved on to Shimon and still no precious stone was found. When He reached Levi He found what he was looking for. Levi became the chosen Shevet. This is why it tells us how long Levi lived- he lived a complete life in the eyes of HaShem. The Torah also tells us how long Kehas lived and then the same by Amram because from them came the precious stones that were Aharon and Moshe. The Malbim says even further that it didn’t end there. From Aharon we got the Kohanim and then from Elazar we got Pinchas who was great within the Bris of HaKadosh Baruch Hu.

From this I think we can learn something very important. Everyone comes from somewhere. A person’s success isn’t totally their own. Even if the generations before them weren’t necessarily viewed as great, that doesn’t mean their greatness came totally separate from them. Parents and grandparents don’t have to be viewed as great themselves in order for them to influence, encourage, and support their children and grandchildren to do great things. Whether they know it or not, they’re having a bigger influence on their future generations than they might thing. The key is to make that influence a good one. Good Shabbos!!